Amy and Mark, known professionally as Amy and Adams stopped in the KBXE studios to chat and sing few songs from their 8th album, Something Different. The husband and wife team have spent more than two decades making, performing in all the usual venues and even on a movie soundtrack. They describe their music as Eclectic/FolkRock/TinPanAlley/BluesGrass. Hear the whole conversation by clicking below. 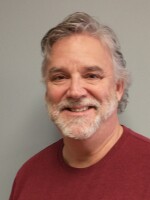 Brett Carter
Brett’s first and last radio jobs just happen to be in the same town where it all started four days after high school graduation (with a lot, a lot of other jobs in between). From playing country hits in 1979 to hosting CenterStage Minnesota now, Brett continues to enjoy making a personal connection with a listener in ways only small-town radio can do. As volunteer coordinator, Brett gets to offer that same privilege of hosting a radio show to amazing people from northern Minnesota and beyond. When not at work, Brett and his wife, Wendy spend time traveling to visit kids and grandkids, finding space for yoga and reading, and always enjoying another cup of coffee--with some cats in their laps.
See stories by Brett Carter