Power in the Wilderness - Ep 1: Castle in the Woods

Episode 1: Castle in the Woods

Filmmaker Karl Jacob and author Aaron Brown take a road-trip-movie style journey through time to unlock the mystery of Bob Dylan’s hometown, and their hometown, Hibbing, Minnesota. They find a dynamic mayor named Victor Power who left few traces after his mysterious death almost a century ago. His political ghost still haunts an opulent, castle-like high school in the middle of the wilderness and reveals a story of America that has never been told before.

Karl and Aaron share the story of how they each found the cold trail of Victor Power, and then how they found each other and decided to team up.

A first generation Irish-American, Victor Power began his career in Hibbing as a blacksmith’s assistant. He developed a knack for understanding people. When his older brother got into a scrape with the local hand of the world’s largest corporation, Vic took notes. In 1903 he went to law school in Chicago and came home ready to fight U.S. Steel.

But first Vic Power makes a name for himself defending the winner of Minnesota’s last known pistol duel.

“Power in the Wilderness” is a production of KAXE/KBXE Northern Community Radio, an independent NPR affiliate and member of AMPERS. This program is made possible in part by support from the Minnesota Arts and Cultural Heritage Fund.

Hosted and Produced by Aaron Brown and Karl Jacob. Edited by Karl Jacob. Additional research by Tucker Nelson. Featuring guests Mary Palcich Keyes, Erica Zubich, and the voices of people in Hibbing. Featuring music by Sam Miltich from his album Peasants with Torches. 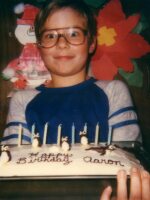 Aaron Brown
Aaron Brown grew up in a trailer house on his family’s junkyard on the Mesabi Iron Range. A sensitive boy and voracious reader, he fell into writing and radio to compensate for his lack of interest in transmissions. He has worked in Northern Minnesota media since he was 16, including stints at WEVE-Eveleth, KUWS-Wisconsin Public Radio in Superior, and the Hibbing Daily Tribune. Since 2001 he’s written a weekly column for the Hibbing Daily Tribune. In 2003 he got involved with Northern Community Radio and spent years as a contributing producer for The Morning Show and Between You and Me. In 2011 he founded the Great Northern Radio Show, the station’s traveling radio variety program that tells the stories of unique places through comedy, music and storytelling. A communication instructor at Hibbing Community College, Brown also writes the blog MinnesotaBrown.com. and is an occasional contributor to the Minneapolis Star Tribune. He and wife Christina Brown live in Balsam Township with their three sons Henry, Douglas, and George.
See stories by Aaron Brown