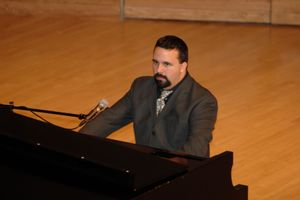 The Spring Concert of the Itasca Orchestra will feature the return of virtuoso pianist Alexander Sandor from Duluth/Superior, for a performance of the Second Piano Concerto by Sergei Rachmaninoff. Passages from this epic masterpiece will be familiar to many, beginning with the bell-like tolling of chords from the piano that open the Concerto. Considered by many to be the greatest of all piano concertos, its themes have appeared in many motion pictures over the years. Frank Sinatra’s classic songs, Full Moon and Empty Arms and I Think of You both borrow from the concerto. The composer concludes the Scherzando-Finale with his own signature by finishing with with a rhythmic flourish that suggests his name: Rach'-ma-ni-noff'! This spectacular music is sure to delight our audience. Also on the program will be the Turkish-style Overture to Mozart’s Abduction from the Seraglio, Giuseppe Verdi’s Overture to this opera Nabucco which surreptitiously supported the Unification of Italy, and the exciting tone-poem Finlandia, by Jean Sibelius, as a spirited hymn to Finnish culture and aspiration. Itasca Orchestra brass will get a thorough workout! One Night Only: Don’t miss it!