"going off of the bucoloic, beautiful landscape, which is very common, but trying to throw in elements of cultural collapse...xenophobia (fear of the other... things that aren't familiar)...there's usually some kind of nice picturesque stage behind all of them.  There's a horizon line that always designates that there's some sort of landcape. There's usually some sort of sky... but then I'll put in elements like the Galaga arcade alien, things like that...completely dichotomous sides competing against each other." - Andy Messerschmidt on his Agroccult series

Ely based Andy Messerschmidt is a prolific artist, to say the least.  His series Agroccult is currently on display at the MacRostie Art Center in Grand Rapids.  Agroccult is a collection of nearly 1,000 landscape paintings all based on some sort of utopian/dystopian scenario or scene.  We spoke with Andy about his the Agroccult collection, what he's working on now and much more.

Heidi Holtan
Heidi Holtan is News and Public Affairs Director for Northern Community Radio. She is on-air host and executive producer for the Morning Show and is also responsible for our local presence on All Things Considered and As It Happens. She produces thoughtful segments like Dig Deep and Strong Women.
See stories by Heidi Holtan 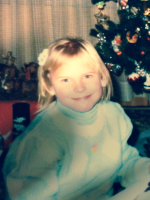 Sarah Bignall
If you need to know the words to a particular song ask Sarah Bignall, the Director of Operations for Northern Community Radio. She claims to know the words to all songs played on KAXE/KBXE. Sarah is deeply involved with the day to day operation of the station assuring that things run efficiently and effectively. She brings a particularly impressive expertise in marketing and graphic design to the job. Sarah grew up in Grand Rapids and continues to live there with her husband and their two children…well…three if you include her favorite, the one with four legs. Sarah is the go to person when you need a straight direct answer or opinion. She continues to work to perfect her “indoor voice”.
See stories by Sarah Bignall